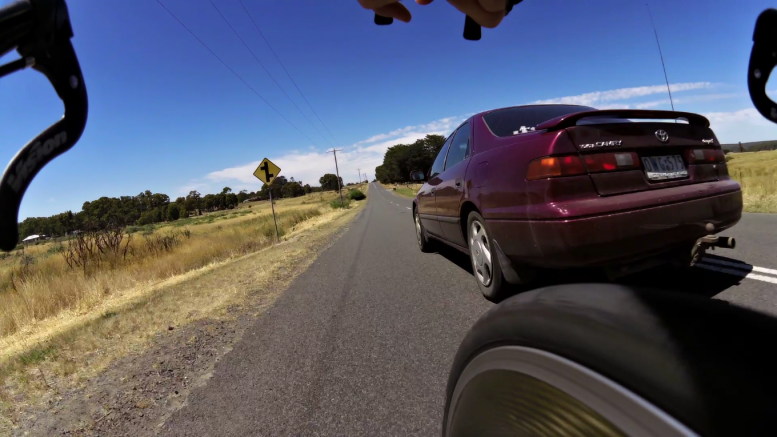 Pictured: not safe passing. This was taken from my bike while surveying the national championship TT course.

The topic of on-road cycling is highly contentious, at least between those invested in it and those opposed to it. There’s much to do to convince the latter group of the value of cycling in society, we need to move forwards with vision and strategy. Sharing the road amicably and respectfully is something we’ll need to work on together. I’ll soon be posting an article dealing with how to use the road safely and respectfully as a cyclist. The more pressing issue, few would disagree, is protecting human beings. Of key importance is the passage of safe passing legislation to provide riders with enforceable safety margins.

What does the law say?

One of the more frequent arguments against safe passing legislation is that it gives more rights to riders, who some already think are over-entitled. The case in Western Australia is that we already have well written laws regarding rights and responsibilities of bicycle users on the road. In regards to overtaking, we have two key passages describing what is considered safe:

To my knowledge, there is currently no regulation that refers to

A driver overtaking a vehicle —

(a)         shall pass the vehicle at a sufficient distance to avoid a collision with that vehicle or to avoid obstructing the path of that vehicle; and

(b)         shall not return to the marked lane or line of traffic where the vehicle is travelling until the driver is a sufficient distance past that vehicle to avoid a collision with that vehicle or to avoid obstructing the path of that vehicle.

Now, Reg 121 makes clear that at no point should a vehicle overtake another (bicycle included) unless they may do so without risk of interference with oncoming traffic. If the path is not free from traffic or obstacles, road users shall not overtake. Reg 124, with a strict interpretation indicates that a legal overtake of another vehicle (bicycle included) actually requires one to have exited the lane the passed vehicle is travelling in entirely. This also requires that one not return to the lane and brake shortly thereafter – doing so risks a collision and impedes traffic, no overtaking only to turn or immediately stop.

The combined intent of the cited regulations above is to govern how vehicles interact when overtaking and minimise the actions one might need to take for safe passage. It’s intended to remove complication from using the road. Follow the rules and safety is the result.

Without analysis of the risks that are imposed upon a different road user, such as a cyclist, it may appear rational that they can be treated in the same way as a car. While most would not think twice about the fact they should change lanes to overtake another car, the way it’s interpreted visually is by the gap between the vehicles. Two cars in adjacent lanes are a lot closer than say, a cyclist in the left hand tyre track and a car while changing lanes. However, the actual distance moved across the road to provide this safe passage is the same. It must be considered that the minimum distance to a rider is larger due to the following:

This misinterpretation of what a safe distance looks like and the function of the existing overtaking rules means refinement is needed. In reality, a specified distance of say 1.5m with appropriate exceptions for use on single lane dual carriageways allows for easier passing. Logical implementation like that in Queensland holds that the overtaking vehicle slow and pass with at least the minimum distance when safe to do so. Simply slowing negates double lines, they are engineered with the intent of preventing passing where there is not enough visibility to account for both opposing vehicles speeding.

I’m unsure why there is such resistance to the concept of applying a metric definition to safe distance. Safe distance is the minimum requirement to ensure preservation of life, there should be no ambiguity. We define the proximity one can park to a fire hydrant (1m), distance from a non traffic-lighted intersection (10m) and distance from a traffic lighted intersection (20m). The regulations continue to bus stops, pedestrian crossings and crests of hills. No other defined distance has caused so much friction as the safety guarantee for a cyclist.

The purpose of safe passing legislation isn’t to provide additional rights, it’s to simplify those that already exist. They also ease the conditions under which one can pass to remove frustration. As it stands, it’s still technically illegal to overtake safely by crossing double white lines at a lower speed. A motorist can be fined for doing the logical and safe thing. This should be clarified to allow people freedom to act responsibly, as many already do.

How is the law applied?

There is a perception that providing safe passing legislation will lead to abuses, unscrupulous individuals might falsely target others. The quick response to this is it’s absurd, why do legal protections exist at all; name something for which one could not make a false claim? Why should the more vulnerable have to forego protection for the fear they may abuse it against their would be abusers? Why is shoplifting an offence, is a shopkeeper any less likely to make spurious claims against others?

That aside, the long response is that the law simply doesn’t work like that. Unsupported accusations are not taken seriously. An allegation can only be made with impartial evidence. This usually requires video or still frame evidence or witness testimony at a minimum. The vehicle must be positively identified as well as the driver if possible. If the claim process was weaker than this, it would already be seriously abused.

Now you’ve got evidence, you need to convince an officer at a station to take a report. This is best made in writing; anecdotally, officers have been known to try and dissuade people from even lodging a complaint in the first place. A lodged report will need to be investigated, this is the first level of verification. The investigator will need to examine the initially presented evidence and determine whether or not, to their knowledge and interpretation an infraction has taken place. If this is deemed to be the case, it can be referred to the police prosecutor. The police prosecutor is an officer who will then choose whether or not to prosecute the charge. They may choose not to either due to a lack of evidence or the improbability of a conviction as only limited resources are available to prosecute cases. A charge may be withdrawn if the offender pleads not guilty and the case doesn’t look probable for a conviction.

Should all the above occur, the offender can have their day in court. It’s not a simple process to hoodwink. For the victim it may actually be an uphill struggle to get the case charged. The victim will likely need to attend court in the case of a not guilty plea, this makes cases like that from which I took the cover image very difficult; I dropped the case as I could not attend Victoria should I be required in court. The process is made all the more harder by the requirement of very subjective judgements of “safe distance”.

The current state of laws regarding overtaking is confusing. It leads good people to make bad decisions. There’s prohibition against taking sensible and safe actions. The law needs to be refined to make it clear what is safe and allow people to behave accordingly. An amendment, followed by an advertising campaign to alert the community is clearly the first step. A major part of the problem is simply that people don’t know what is safe.

There’s ambiguity that makes it difficult to handle cases of legitimate endangerment. The darker side of the issue is that some people don’t care what is safe and act deliberately to intimidate. In these cases, a vehicle is used as a weapon. A motor vehicle very much has the capability to severely injure or kill, and when used as a threat needs to be treated accordingly. Naturally, where someone is threatened or attacked with a classified weapon the public response is shock but this is often not the case when it happens on the road.

There is plenty more to be written on the matter of sharing the road in a legitimate sense. Next will be an article on best practice cycling, covering etiquette and skills to survive and share the road. A detailed look in to what a Safe Passing law would look like is also warranted.

There are numerous other arguments made against cycling on the road and safe passing distance. Honestly, if you come across this and wish to discuss I’m more than happy to respond. Just be respectful and we can have a chat. Insanity and abuse won’t get anywhere.

Peace to all road users.

Be the first to comment on "Safe Passing Legislation, Why Western Australia Needs it"