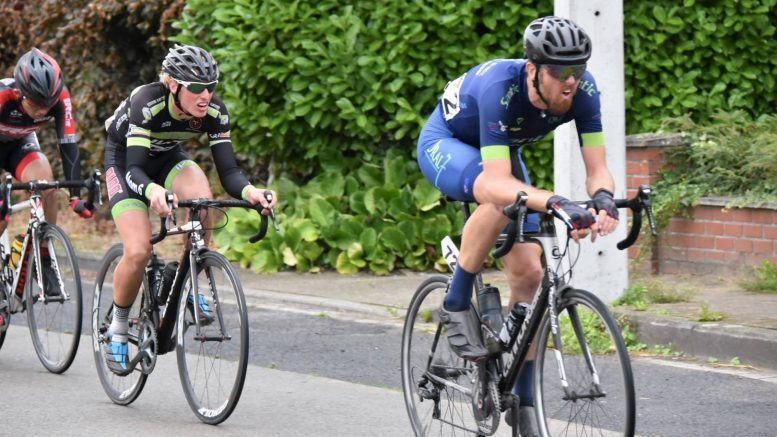 On Friday 28/07/2017 I competed in my eighth kermesse. Entering the race I wasn’t feeling exceptionally confident, nursing a cold that just won’t quit, commuting 35km out to a 6pm race start. Upon arrival the rain started and we watched a few competitors quietly slink away without signing on. I heard someone drop the word “cobbles”, fortunately a false alarm; wet cobbles are probably the last thing you want when you’re unsure at your ability to even pedal the bike let alone fight for traction.

As has become the routine, we managed to get lost en route to the sign up so I got in a very hurried reconnaissance lap with Rich. This spooked us even more after discovering several 90 degree plus turns, a couple with copious amounts of paint through the apex.  Another false alarm as it turns out, it seems I can corner a lot better than I give myself credit for if the video evidence is to be believed.

We lined up in our customary at-the-front-but-not-on-the-front team position in order to keep ourselves forward of crashes and splits, ready to cover moves off the line without having to initially roll a turn of pace. My Flemish is limited to tot ziens (see you later), so the pre-start announcements always have me nervous waiting for a whistle, movement or the click of cleats to signal go o’clock. The lead vehicles took off followed by a whistle and I excused myself from the gutter I’d been forced to worm into on the start line, roughly one hundred starters off. On the start line. Casually Deliberate was invented in Belgium.

There was an initial hard surge of pace off the line as attacks went boldly into the cross head wind. The starting street is wide but with a scattering of furniture, including speed bumps, a bollard protected lane, a “valley of death” (gap down the centreline of a concrete paved road) and ninja-catseyes made of glass at a low profile. The peloton expands fully into the space where it’s not lined out. I had a quick catch up with teammate Liam mid-topple as he got bumped through the valley, fortunately I was able to provide him the shoulder he needed to prop himself back upright.

I spent the first few laps surfing wheels, keeping myself in contact with any moves, observing teams and trying to peg strong riders. My reverie would be short lived. The hammer dropped and the splits started driving open. Myself, Joe and Rich had positioned ourselves well for this and either found ourselves on the right side of them or in position to hop them or help each other. Before I knew it, Joe and I were taking turns with the old one-two off the front.

Once it became evident to me how much damage the crosswinds, wet and pace were doing to the peloton I decided that my role for the day should be to try and enhance the splits and make sure Joe and Rich were across them in order to sprint for a result. I started rolling hard turns in the crosswinds, leaving about 4 wheels worth of room to echelon in order to apply pressure to riders further back. I continued to keep an eye out to make sure they were still in contact and protected. Team formation before the chaos.

Champy, Jake, Liam and Tony unfortunately found themselves on the wrong side of some moves. They were pulled at lap 12/23…some 60-75 riders were pulled by this point. Rich suffered a puncture and had to withdraw. By this time, a lead group of ~10-12 riders has been established, with roughly that number chasing but without cohesion and in varying groups. I found the next phase of racing to be very frustrating.

We would periodically form a cooperative chase. We had brought the lead group back to about 100 metres at one point. Every time it looked like the gap would be closed someone would attack solo and fail to bridge, destroying the cooperation and allowing the gap to go out again. Ultimately our chase group split in two from the pressure, then the forward group would split again. This left my group of 6 at the back of the race, Joe in a group of 3 ahead and 3 that would bridge the break of the day.

The uncooperative dynamic continued most of the way to the finish line, only diminishing somewhat with fatigue. I took a dig at about 2-3km from the finish line, hoping to solo away. Looking back at my footage though, this was ill timed – I failed to kick hard enough to snap the elastic and I didn’t corner hard enough so the counter managed to come back through my draft. The plus side of this was that I managed to grab the tail and avoid pulling another turn…on the downside, I was completely cooked anyway and rolled in as last finisher in 21st. Joe managed 13th, not unlucky in this case. We’re both pleased to have brought back some prize money. I didn’t snare that elusive top ten but I’m happy with being in the top fifth of the field with so few that were able to finish the race at all. The conditions were hard, the course technical and the competition high; all conducive to a thorough learning and training experience!

Be the first to comment on "Moorsele Kermesse Race Report"