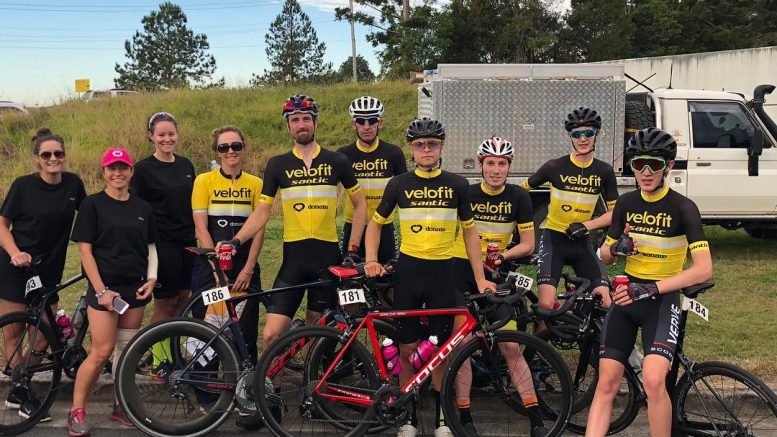 Battle Recharge is a 4 stage tour held at the Tweed Valley in New South Wales near the Queensland border and the Gold Coast. It consists of two road stages on separate days, followed by a double header day 3 with an individual time trial and criterium. This is my first National Road Series (NRS) event and has been a true enjoyment, challenge and learning curve. I’d re-learn quickly how strong some of the racers outside WA are. For this tour I’ve been on loan from Dome Coffees Cycling to Velofit Santic, operating as a composite wildcard team with WA riders Matt and Tim Harvey, Bryce Lannigan, Jordan Schmidt and Mat Upton. Travelling and racing as a team has proved, as always, to be a great bonding experience. We’ll have shared memories and in jokes for years to come.

Logistically, this tour was going to be a challenge. We’d had plans drafted up by Mel and Mat for how to manage equipment, riders, supplies and spares. Each day we’d get the whole crew together and discuss how we could best achieve our needs. We were fortunate to have Bree’s husband Luke around and unfailingly helpful. As a team we all worked together to handle mechanical issues and transport. We shared equipment, spares, food, water. Each day would be a game of team tetris. Two vans, 3 drivers, 10 bikes; to get all to where it needed to be was an exercise in problem solving. The first climb of stage one

We arrived with nervous optimism and no caffeine. Personally, I didn’t plan my prep very well here and spent my warmup looking for toilet time. One of the unfortunate things about a big race is getting a couple hundred athletes in a small radius means bringing some insane diets and excess hydration to a limited number of…facilities. I ended up with a 5km warmup which was probably inadequate.

Post warmup we snuck as close to the front of the bunch as we dared, using glares from established teams as a benchmark. We cracked a bunch of jokes while our muscles coiled with tension in the hour long minutes to the commissaire’s release from the line. Soon enough we were away for our first two neutralised kilometres, as I’ve come to expect, this is always full of jockeying for the rights to first attack and counter attack at the drop of the flag.

This stage takes in a roughly 30km spur before five times through an undulating circuit with the day’s KOM, then returning on the initial spur to the start/finish line. In this initial section is a punchy climb the base of which starts at a tight turn off the highway with traffic furniture. This probably made some early selection, catching folk unaware and out of position. I really enjoyed this though the pace was on and the traffic was high. Some poor soul shifted a derailleur through his spokes, I was forced through a sand trap that proved tricky for traction but managed to hold a wheel with little fuss. Being able to climb and descend over the whole road width really added an element of fun and tactical depth to the racing.

We encountered the New South Welshman take on pave; a section of day old hotmix. This pelted us with stones and tar on every run through, there were more than a few salty remarks about chipped frames and glasses but such is life.

The pace was basically ratcheted each lap over the KOM. After the 4th time around, I found the surging efforts over the course had put a dent in my undertrained endurance and I cramped at about 90km. I went off the back and rounded up a grupetto buddy to take over the KOM for the 5th time. We rounded up another and rolled turns for about 20km before another 8 joined us making the grovel back to the finish much more enjoyable. Both the Harveys and Jordan did well here, remaining in the peloton.

This stage was very similar to stage one but with the circuit run in reverse and instead of returning the whole way on the spur there’s a separate leg back to Tyalgum a bit further North.

The first major event of the day was a fast crash that took down Brendon Davids, last year’s winner. I don’t know Brendon but I was rooming with his partner Brit on our women’s team so felt particularly sorry. He’s one tough racer, after some brief medical attention and a taped shoe, he remounted the bike with a skinsuit in tatters and visibly bleeding. He rode 120km to the finish from here. I’m not sure if I’d call it smart but it sure is impressive, I’m now a fan.

A break was allowed to go and the pace would be more moderate with the McDonald’s team picking up a steady tempo. We had Luke, our pseudo-swanny manning the feed zone and we were all able to grab bottles. Uppers was able to procure some water from the convoy and share it around. Mercifully, the new road had dried (mostly) and there was much less loose tar and stones to contend with. The break was caught and the Bennelong train surged to the front to keep everyone in check. A rapid descent down the first climb of the day seemed to perturb some people, allowing me to take position for minimal effort. Back out on the highway we were pinned out in ones and twos, I spent a bit of energy to push up and locate my team mates in prep to help towards the final.

Unfortunately this didn’t really go to plan, as we turned off the highway for the return 25km I found my rear tyre was flat. It took a while to get a wheel change, though I was glad to get one courtesy of the Veris team car but between a slow change, a cable fouling on the spokes and my lack of energy, no chase back was going to happen. Knowing that GC wasn’t even remotely an option and I would comfortably make time cut, I cruised in to try and recuperate my legs for the next day’s time trial.

Everyone knows I hate a time trial, so I begrudgingly gave this a crack. Having haemorrhaged 30 minutes on GC the previous two stages I’d ensured myself an early start here from the dazzling heights of 80th on GC. I prepped to about 90% aero-dork on my Foil with my disc wheel, 60mm front, shoe covers and Kask Bambino. I couldn’t wear a skinsuit but I did afix my invisible aero bars. Mel drove support behind me to instil the fear of being run over to keep my average up.

I think I nailed my warm up for this as well as I could without a trainer available. Unfortunately between my current form and the new sensation of a couple of big race days before hand put a big dent in my power, being near 10% down on my goal. It hurt but pushing as hard as I could but couldn’t reach the right level of suffering. Fatigue is real. I didn’t feel comfortable in full tuck either and spent more time on the hoods and drops than intended.

All said and done, it was enjoyable to get out a decent effort in my discipline, on a closed course with the atmosphere of an NRS tour. I crossed the line and held second place for a good while, I even had a chuckle at my virtual first on GC. I tumbled down to 29th as the hitters rolled in, placed at +44 seconds from the winner.

Being sore, not a huge fan of crits and never having done an elite level criterium I didn’t have high hopes for this. My basic plan was to keep out of trouble and probably go out the back door in the chaos, recording a finish at being lapped. Things went better than expected though.

I suppose over time I’ve gathered some reasonable bunch craft and handling, though I’m still not the most decisive or aggressive. I found it pretty easy to hold position near the front of the large field and keep myself out of trouble. I applied a few tricks in cornering and using my momentum to maintain my place for minimal energy cost. That’s not to say it was easy, the Bennelong boys are absolute monsters and had a stranglehold on the pace. For almost the entirety of the hour their train would swap off at the front, driving the 47km/h pace.

I discovered I was quite good at predicting gaps inside or outside a turn that could be used at speed to take position and that staying to the centre of the bunch would allow quick moves up the field in the straights as the bunch parted to corner inside or outside. Riders were mostly well behaved but there were plenty of slight frights. A good handful of occasions there were unintended fist bumps in the turns as the group flowed around errors organically. The predominantly wide turns did allow a luxurious margin of error.

I kept my nose clean and after not catching much sight of my team mates for the race I found that Bryce had been skilfully lurking behind me. He leapfrogged in the last few laps and as Bennelong pinned it single file I found it hard to make any ground towards him, hoping in vain to give him a bit of assistance in the final. In the heartrate-boosted jostle of the second last lap, the good behaviour of the bunch would finally come unstuck. At the midway point there was a crash about 10 metres in front of me. I’m glad to say, I’ve now become primed for these events. I gently modulated my speed down and death-stared for a gap, shooting through with as much momentum as I dared and reconnecting with the front group while the field split both due to the crash and pressure applied. I think my major tactical failure here was not pushing harder for position in the duration of the last lap (or maybe I would have been better served being up earlier). I pretty much followed through at the same wheel I entered the lap, overtaking a couple in the sprint for a phenomenally mediocre 35th place. In hindsight, I know I can’t kick so I should have made the move earlier.

Bryce fared much better, cracking 10th and rating a decent finish line photo. We all made it unscathed, bonded by Battle and later by beer.

Be the first to comment on "Battle Recharge Race Report"