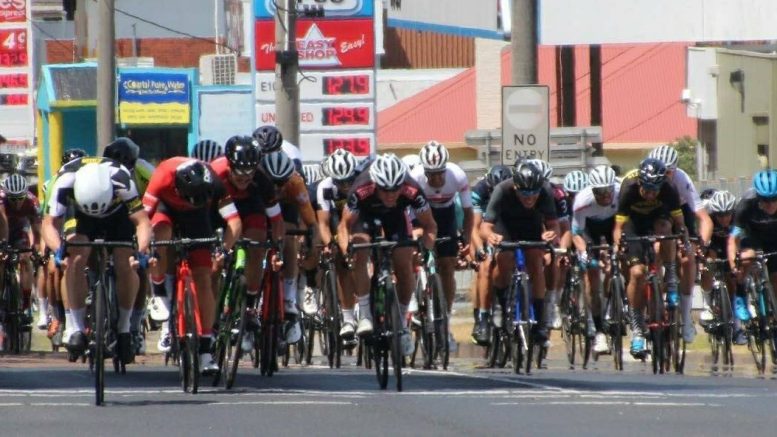 Almost on a whim, in December I decided to undertake a new challenge in my cycling career; the Melbourne to Warrnambool, an epic 262km Australian classic between the eponymous cities and the first National Road Series race for 2019. I’d thought about competing in either this or the Grafton-Inverell for a few years now and this time I decided to literally put my money where my mouth is. The distance to the finish for a West Australian Sandgroper is great, starting first with a redeye flight (special thanks to Darren Shanahan who basically covered this for me) across our large nation and then a road trip to Geelong. From Geelong there would be a final 30 minute drive to reach the start line of this mammoth road race. Myself and Jake, roadtripping

279 competitors lined up for this edition. In support I had my Velofit team mate Jake Coward, he and his fiancee Jess had been outstanding hosts. Jake collected me from the airport at 6am and the two made me very comfortable at their house in Melbourne and a relative’s in Geelong. Jess would be our soigneur for the day and did an amazing job scurrying between feedzones, even managing to be prepared at the last feedzone which was missed by other better equipped teams. It’s no mean feat driving roughly 600 kilometres to support a couple of amateur racers and the effort is not lost on me.

Jake and I opted to forego the warm up given we were in for a minimum of six hours plus on the bike. I’m not entirely sure of the wisdom here as what ensued after the 3.7km neutral zone was two hours of attacks before the break would be allowed to go. Jake launched one of the first of the day; projecting his face immediately upon the coverage. The large peloton careened down the highway at a 50km/h pace. Attack after attack would go and be reeled back with the two of us doing our best to cover them. Jake had been delegated to shout at me to contain myself and keep me from being caught at, which he did as effectively as he did loudly. As we reached the first KoM climb, the pace really went on and it seemed this might do the necessary damage. I surged to the front as a small group started to ride away but alas, it came to nothing.

Moves continued to launch up the road, I feel the ferocity generally climbed as teams and riders sought to break the elastic. We passed through the first feed zone at a high pace but at least a truce was held and no one seriously attacked the feed zone…as has been known to happen. Nonetheless, I failed to find Jess so didn’t grab a musette but Jake graciously threw me a bottle which I gratefully stowed in my jersey until my first was finished. We had no certainty of being able to get any water other than that through the three feedzone handups over the 6.5 hours of racing. Acquiring a feedzone handup is no mean feat, first you must find your feeder amongst spectators and those of other teams, get a clear line to move towards them and then cleanly grab a bottle or a musette strap while travelling at 30-50km/h (without yanking the swanny’s or your own arm off in the process…preferably).

The break would eventually get out around the 80km mark, following my last attempt to make the move. I was pretty upset when I realised I’d missed the boat, this was my best chance to make an impact on the race and indeed, it would be the break of the day. This marked the second act of the race. The pace rolled off dramatically, with all major teams represented in the break. At this point a number of riders chose to answer the call of nature, much easier facilitated when the pace was dropping to the region of 30km/h! As it was clear that the racing was off and there was slim hope of bridging a co-operative 14 man breakaway with teams hostile to the proposition patrolling the front, I sought out some friends for a bit of banter.

Somewhere in this intermediate period I too would have to answer the call. I didn’t choose a great moment, other than the fact there was a decent smattering of other riders doing the same. The pace picked up a bit in the peloton and I was just able to clip back in and get rolling around fifty metres after the last car of the convoy passed. A minute later and a couple of turns amongst temporary allies, we were safely hopping cars in the convoy to rejoin the main field where the real challenge begins – barging your way back up a field of a couple hundred to the relative safety of the front fifty riders. It’s a good thing I did, it allowed me to dodge the silly crash where a handful of riders decided that avoiding a parked car was an unreasonable imposition.

From here on, not a great deal of interest would happen for the next two hours until we reached the Great Ocean Road. A couple of teams would start to bring the pace up, largely to avoid time cut. The break went beyond 15 minutes. The race wasn’t over yet though, fourteen were in the break so that left some decent top twenty positions to those ambitious enough to form a chase or a team willing to set up a sprint. Potentially top ten places were on the line, depending on how the health of the break faired as riders could potentially be dropped and engulfed by the peloton.

As we hit the Great Ocean Road, speeds ramped up. From here to the finish there was a substantial exposure to wind which varied between cross and tail wind, allowing for alternating sections of applied pressure to the bunch and high speed. Echelons would form in the cross winds and several accidents would occur over the next hour. Cross winds are my turf and as the big guns like Nathan Elliott started to get involved, I lurked near the front and rolled the dice with attacks and counters. We’d get up the road and be drawn back or a small echelon would form with a guttered pace line running the gauntlet of the eroded road’s edge.

Eventually, a powerful chase group formed at around the 240km mark, while I’d allowed myself to be boxed in by the search for shelter. Elliott, Tristan Ward, Jesse Coyle, Jay Vine, Neil Van Der Ploeg were in this chase. I retained composure, moved to an attacking position and aimed to jump the gap solo. I built some momentum through a small depression in the road and leapt past the front of the peloton at around 60km/h. I pushed on for what felt like an eternity, though the data shows far less. I’d nearly closed the gap at an average of 56km/h when the chase turned a 90 degree corner into a headwind. I made the mistake of glancing at my bike computer and between the figures displayed, the sensations of pain, the exaggerated distance remaining and the pursuing peloton, I allowed myself to crack and sit up. I’d convinced myself it wasn’t worth it and we’d be caught. If there’s one thing I’m unhappy about in this race it’s not executing this bridge. I failed at completing the job I’d set myself, while attainable and I’ll be committing this to my motivation bank. This chase group would stay away and gobble up most of the remaining top twenty positions.

Bridge attempt minus my soft pedal…

Returning to the peloton, I found a “safe” position near the front, in reality it got pretty choppy from here to the finish and one had to have their wits about them. This takes a good deal of mental effort beyond the five hour mark of racing. More chase groups would form over the closing kilometres but none would stick. One last hill of note remained to thin the group before the finish, the pace wound ever higher as we prepared for a sprint. I tucked myself where I could duck wind and strike out for a crack at the bunch kick. The finish line is up a long uphill drag in Warrnambool, though still high speed under the conditions it’s wise to leave it late, especially with 260 kilometres under the belt. I started to wind up and out of the bunch at around 300 metres and was making decent progress but a very game rider shouldered between myself and another nearby, this completely undid my nerves and I backed off. I rolled in 39th but ecstatic to have completed such a challenging race and remained competitive.

While ambitious goals weren’t realised, I’ve had an amazing trip and gained invaluable experience in the race. I’ve learned something about pacing for an absurdly long classic and how my endurance fares in long races. I managed to grab musettes which, while trivial for some, is a new skill for me – never having had the logistical support or need for one in the past. I’ve found that I can attack an NRS field, in the first five kilometres, after the 200km mark and in a sprint finish. I learned that the pain of disappointing myself by giving up is probably greater than the pain of continuing. That might be the most valuable take away.

Be the first to comment on "Melbourne to Warrnambool Race Report"